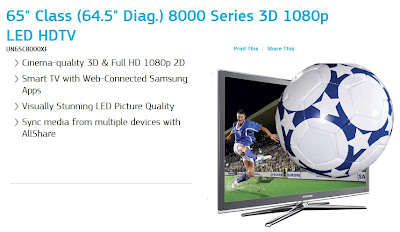 Well, other than having balls fly at your face .... I bring to you, THE GREATEST TV EVER MADE (available to consumers so far) 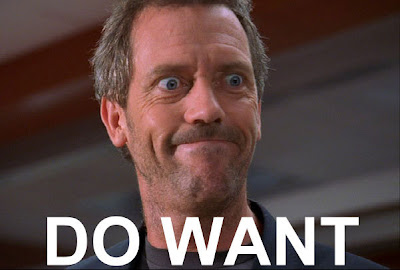 Every time I go to Fry's, I walk by the 55'' version, and it stops me dead in my tracks. The picture quality is unmatched. However, I already have a 65'' Mitsubishi DLP in the living room, and I didn't want to downsize. Then I saw that price, and OMG, STICKER SHOCK set in. I'm gonna wait a while. Still, the long-term plan is to get this, and move the Mitsubishi into my game room. One of these days, it WILL happen. 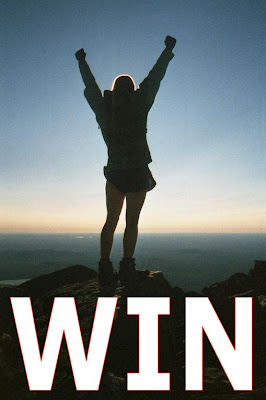 Zombies. Who doesn't love 'em? The zombie movie has made a comeback in the past decade. A couple of them were pretty good, and they helped coax George A. Romero and his Harry Caray glasses out of retirement. There's a zombie TV series starting on AMC this month called 'The Walking Dead'. And, they're the perfect video game cannon fodder. Left 4 Dead and Left 4 Dead 2 sold millions each, as well they should've. They're great games.

Another strong-selling zombie game is Dead Rising. Set in a shopping mall, your job is to find out what caused the undead outbreak, but you only have 72 hours to do so. It was a great setting for a zombie game (even if it's taken lock stock and barrel from a classic Romero film). Great graphics, especially for a launch-window game, with hundreds of zombies on screen at once. Tons of objects that can be used as weapons, and you can level up your character for multiple playthroughs. So why did I hate it?

The game did everything in its power to get in the way of the fun. They give you an open-world setting, but they restrict you with a timed mission structure. The missions are given to you via text, at the bottom of the screen, and almost always when you're in the middle of another mission. 90% of the gameplay is 'escort missions'. Just the word 'escort mission' is enough to make most gamers groan, and the ones in Dead Rising are no exception. They make sense in the scope of the game, but the survivor A.I. was terrible, and rarely fought for themselves or made any effort to keep up with you. And the biggest deal breaker for me? The save system is archaic and broken. You have to walk into a bathroom to save your progress. On the way to every bathroom are tons of zombies. If you're low on health and don't have any food to eat, you may not survive long enough to get to a bathroom, which means whatever progress you've made since the last save will be lost. After this happened a few times in a row, combined with everything else, I gave up on it.

The worst part of all of this? Before Dead Rising shipped, they released a demo on Xbox Live. In the demo, you had 30 minutes to go wild in the mall and kill zombies however you wanted. It was a blast! Playing the demo only set me up to be disappointed by the restrictive final product. But then Capcom announced Dead Rising 2 last year, and I felt optimistic. 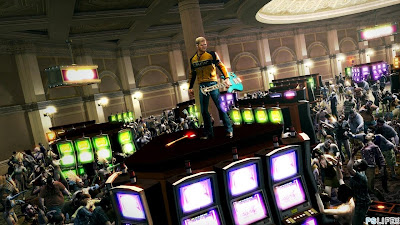 Set in a small Vegas-like town, you're given the ability to combine two objects and create a new weapon. This replaces the ability to take pictures that was in the first game, which I rarely used. This got me (and a good amount of gamers) excited. Put a shotgun together with a pitchfork and create a 'boomstick'! Put a propane tank with a box of nails and create an IED! Put a coat hanger with a wheelchair and create a rolling abortion machine! Okay, so you can't make the last one, but trust me when I say the possibilities are almost endless. On top of the weapon system, and the new setting, I also assumed that they'd fix the broken save system and the mission delivery method. So how did they do?

While it takes place in a gambling town, most of your time will be spent where? In a shopping mall. That's right. Your safe house exits into a mall, which may as well be a copy / paste job from the first game.

The load times are atrocious. They were bad in the first game, but they're even worse here. The screen freezes up when you're trying to get to the main menu. Every time you walk through a door? Load screen. And you'll walk through doors a lot, so I hope you like loading screens! Every time you save the game, the screen freezes for almost 15 seconds. It makes you think your Xbox is crashing. Not good.

How do you get your missions? Via text, at the bottom of the screen, usually when you're in the middle of another mission. Again, you're fighting for your life against a horde of zombies, while escorting survivors (who admittedly have improved A.I.) and you have to 'answer your walkie-talkie' to hear about some other survivor you need to save. Wait, did I say 'hear'? I meant 'read'. Does someone at Capcom have a problem with voice acting? Other than cutscenes, there's hardly any of it in this game.

The save system? Still shitty. They give you three separate save slots instead of one, but you still have to run to a goddamned bathroom to save. Note to developers: It's 2010. Most games have aggressive auto-checkpoints, or are like Elder Scrolls IV or Fallout 3 (autosaves, and save at any point you want, into as many save slots as you want). Make an effort to keep up with the competition. If you make gamers work to save their progress, you failed as a developer.

Combining items to make new weapons? Yeah, it's pretty cool. However, you have to take these items to a 'maintenance room', so you can't just do it on the fly. This adds to the tedium that the game seems to relish. 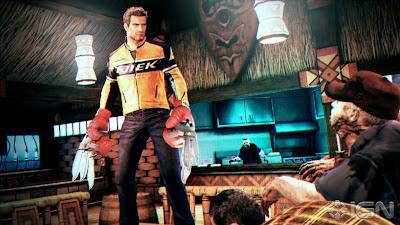 They added online co-op, but it's limited and basic. They also added an online multiplayer mode, but it's stupid and feels tacked-on. It's a reality game show where contestants have to kill the most zombies. It ties into the beginning of the single-player campaign, but it's just a set of mini-games that make Fusion Frenzy 2 look like Mario Party. I like that you can carry over your prize money to the single-player, but it doesn't make the game modes fun. I had troubles finding a game, and I was playing on the first weekend after the game released.

I really wanted to like this game. I played for quite a few hours last weekend, but it just kept getting in the way of itself. If you're a fan of the first game, by all means, pick up a copy of Dead Rising 2. If you weren't a fan of the first, stay far, far away.
Posted by Lord Bling at 7:05 PM No comments:

I hate network TV, but I love 'House'

Hey kids. I haven't posted anything in a while, but not because I've been busy. I mean, yeah, I've been working and traveling a lot, but I've also been gaming a lot (my Xbox Live gamerscore is approaching six figures, and I got a new laptop and Steam has become an addiction). I've also been watching more TV. I typically just watch sports or McLaughlin Group, and I stay away from network TV. Well, except for one show in the summer: Big Brother. You can say it's trashy and worthless, or you could look past the surface and see it for what it is: A live 24-hour-a-day sociological and political science experiment. Granted, it's a guilty pleasure, but the way people manipulate each other is fascinating. However, other than Big Brother, I don't watch network TV. Dancing with the Stars, American Idol, and a ton of doctor and lawyer shows. Crap, crap, and more crap. Then I caught a couple of episodes of House, and realized I needed to make an exception. It was this line that got me: 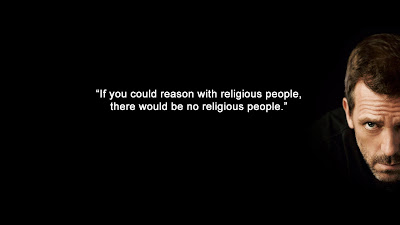 A misanthropic atheist with a drug addiction who excels at manipulating people? Count me in. And that it's on Fox makes it even better. Sometimes it feels like they slipped one past the goalie, so to speak. Most episodes follow a specific pattern, but it's an enjoyable one, and sometimes you actually learn something about specific diseases. Most of the time, they fall into the 'Star Trek' trap of using a lot of big words in a hurry, but at least the words actually mean something here. It also doesn't hurt that the side characters are well-written and interesting. What can I say? I'm hooked.

Okay, gotta run. Team Fortress 2 is half-price on Steam this weekend, so a lot of people are playing.

EDIT: As if Ryan needed another reason to watch House, an episode from Season 4 called 'It's a Wonderful Lie' has the following exchange (posted from Wikipedia):

"In the clinic, House treats another female patient, called Melanie (Jennifer Hall), whom he initially diagnoses with strep throat. House notices that she has a necklace of Saint Nicholas, whom she describes as the patron saint of children. At the same time, he notices that she's had HIV tests every 3 months, and that Saint Nicholas is also the patron saint of prostitutes. Since she isn't a child, he tells her that he's deduced that she is a prostitute, which causes her to smile in response. She later returns with pustules on her neck and chest. House asks if she does donkey shows, and when she says yes, he gives her a prescription for contagious ecthyma, a disease she has that can be caught from donkeys. She invites him to see the show, and says he might like it."
Posted by Lord Bling at 11:08 AM No comments: