The Bronco train just keeps rolling. Even with those fuck-ugly 'throwback' uniforms (or as I'm calling them, 'throwup'), Denver looked tough on the road last night against San Diego. One thing they needed to improve upon after a close win against New England last week was the special teams. I'd say they made some adjustments:

Now, I'm not saying they're gonna run the table or anything foolish like that, but it's looking like we should take the division this year. It may be the AFC Worst, but the playoffs are the playoffs. And I'll also say that like all of the 'football experts', I didn't believe they would be this good. I mean, c'mon. Elvis Dumervil, a fourth-round pick in 2006, now leads the league with ten sacks in six games. TEN. That's some Tecmo Super Bowl shit right there. The only question right now is, 'Will the Broncos be good enough to beat a top-tier team, like the Steelers or Colts?' We'll find out the answer to both before this season is over.

On another note, let me say that I HATE Stuart Scott. Hate him. He's not funny, and he never was. 'As cool as the other side of the pillow?' Sounds like an outtake from 'Kids Say the Darnedest Things'. 'Boo-yah?' Is that the sound that football pitching machine made when it drilled you in the face? 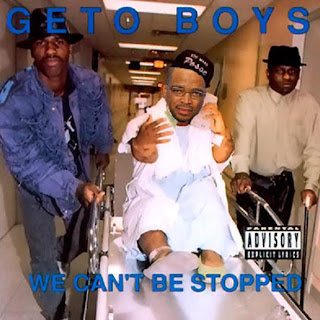 Thanks to The Miles for the Photoshop inspiration.

By the way, congratulations to the Kansas City Chiefs, who finally won a game this year. Although by doing so, they might have blown their chance at the only prize they could feasibly win this year (the number-one pick in the 2010 Draft). They still have a shot though, since Detroit also only has one win, and Oakland now has two wins.
Posted by Lord Bling at 9:50 AM 5 comments:

Video of the Week -- I needed a good laugh

I needed a good laugh today, and this video did the trick.

Posted by Lord Bling at 1:26 PM No comments:

This blog is almost five years old, and to my knowledge, not once have I ever written about Rush Limbaugh. The Midge brought him up once back in November of 2004, before the training wheels were off the site. That's saying something, because The Midge still has training wheels on his bike. Those things are TALL. But enough about midgets trying to ride grown-up toys. I think it's time to break my anti-Limbaugh streak. Apparently, he doesn't think Obama deserved the Nobel Peace Prize:


"Our president is a worldwide joke. Folks, do you realize something has happened here that we all agree with the Taliban and Iran about and that is he doesn't deserve the award. Now that's hilarious, that I'm on the same side of something with the Taliban."

'We all agree with the Taliban'. Wow, I didn't know you spoke for all people. Or maybe you only speak for all insanely-out-of-touch neo-conservatives, like Bill Kristol?

Anyone who's ever spent five minutes reading a political article on The Guardian or any other major international news website could tell you that our current president is respected in other countries for being courageous enough to reach out and communicate with nations that the previous administration only wagged a finger at from behind a podium. Does that mean he deserves the Nobel Peace Prize? I'm not wise enough to say who does and who doesn't, which is more than I can say for 'pundits' who don't read international press, like Bill Kristol.

So why, after all this time, am I giving the racist, pill-popping hypocrite space on this site today? I think Sun Tzu said it best:

"If you know your enemies and know yourself, you will not be imperiled in a hundred battles."

P.S. If this is too much politics for you this morning, then here's a link you might appreciate: Guy Ritchie called Madonna 'retarded'. I know, right? Funny.

P.P.S. Back to politics. I don't think this deserves a separate post, but I wanted to mention that Dennis Miller recently said that Glenn Beck and Sean Hannity are so far to the right that they're 'off-road', but where did he say this? On The O'Reilly Factor, of course.

Share your thoughts about Madonna in the comments below...
Posted by Lord Bling at 11:14 AM No comments:

Video of the Week -- The Mag Seven

This week, the new album from surf-rock instrumentalists The Mag Seven was released. They had a song on the first Skate video game from EA, and you could also unlock a t-shirt with their band logo on it. This new album is a lot more mellow than their previous punk-inspired stuff, but I also think this is their best album yet. 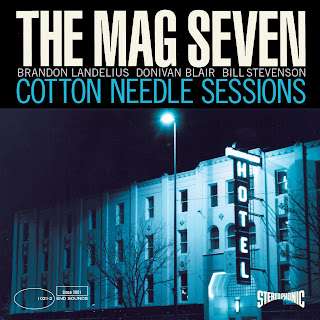 Here they are live, from a recent performance in Dallas. This song isn't on the new album, but it's similar in style:

To hear more, check out some samples on the Amazon page. I think a lot of you will like it. It's not like anything else out there right now.

P.S. In the interest of full disclosure, the bass player and guitar player are both good friends of mine. They're also broke, so buy the album already ya cheap bastards!
Posted by Lord Bling at 12:10 PM No comments:

Best of the Worst?

Good morning. I thought I'd stop by the site to post this (courtesy of ESPN.com): 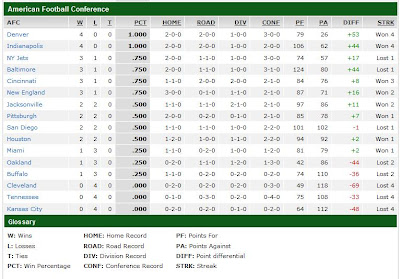 I have no delusions of grandeur. My earlier prediction of a 4-12 season still could come true, especially with the brutal schedule through the next two months. But the defense has allowed an NFL-low 26 points through four games. Dallas was the first true test, and they passed.

In other news, there's still a professional football team in Kansas City. However, there is no word if NFL football is still being played there. Stay tuned for more details...
Posted by Lord Bling at 8:22 AM 4 comments: