Video of the Week -- Rap Chop

I may have posted a video link yesterday, but THIS is the true, official Video of the Week. It's also another example of why I love the internet:

Epic.
Posted by Lord Bling at 6:23 PM No comments:

Swine flu. Earthquakes. I picked a fine time to go to Mexico, didn't I? Well, it's not like I picked it, as I'm going for work, but still.

Since I'm gonna be out for a while, I'll go ahead and post a link to my Video of the Week. This is a clip from an episode of the first season of Wonder Showzen. I thought it would be fitting, since this episode was sponsored by MEXICO.

EDIT: I'm not going! Our corporate executives cancelled all travel to Mexico until this blows over. So, you got your Video of the Week a little early.
Posted by Lord Bling at 1:40 PM No comments:

Video of the Week -- Shawshank in a Minute

Don't sleep on the skills.

Props to the Amberglar, all the way across the pond in Germany, for sending this to me today.
Posted by Lord Bling at 11:35 PM No comments:

Using your morality as an excuse not to do your job

The recent Supreme Court decision in Iowa, which recognized that denying people the legal rights associated with marriage is unconstitutional, has brought forth an issue that is one of my biggest annoyances. Mostly in small communities around Iowa, county recorders are using their personal religious objections to gay marriage as an excuse not to do their jobs on April 27th, when the state will begin recognizing same-sex unions. The article suggests that gay marriage opponents have been attempting to influence recorders to refuse to file paperwork on behalf of gay couples as an act of civil disobedience.

The idea that you can abandon certain job responsibilities that you feel are against your moral code is not a new one. Medical professionals don't have to perform abortions, if they choose not to. The problem with this type of exception in the case of gay marriages is that it's essentially based on discrimination. The county recorders apparently have no problem marrying straight couples who have a 50% likelihood of remaining married after 5 years. Gay people, however, do not deserve the same protections spouses receive legally, apparently.

I think there's a huge difference between marriage for legal purposes and marriage in your church. If your church wants to deny gay people the right to be married there, I'm fine with them keeping their hypocrisy and "sanctity of marriage" crap to themselves. The idea that straight people uniformly respect the institution of marriage is laughable, but if you also happen to believe that Zombie Jesus came back from the dead for your sins, believing that straight people have respected the sanctity of marriage really isn't that big of a stretch.

Legal marriage is a whole other ballgame. To say that because your church doesn't agree with gay people getting married, that your state shouldn't let them is using your own distorted morality to dictate what people who may or may not believe the same thing can do. And if you tell me our forefathers were Christian one more time, I'm going to slap you upside the head with a history book. They were deists, who wanted anything but religions running the government. Look it up.

As for the recorders in Iowa, I hope anyone who denies gay people the right to be legally married gets fired. Why should gay people have to pay taxes to support the salaries of people who won't do their jobs and want to deny them rights?
Posted by Ryan the Angry Midget at 2:06 PM 3 comments:

Video of the Week -- The Best of Clarence Boddicker

Two posts in one day? Crazy, I know, but I had to get a VotW in here, and it HAD to be this one:

Nothing tops 'Bitches, leave!' NOTHING.
Posted by Lord Bling at 5:18 PM No comments:

I tweaked my neck last weekend while doing some landscaping in the yard. So I went to a chiropractor, who took some x-rays of my back. Here's one of them: 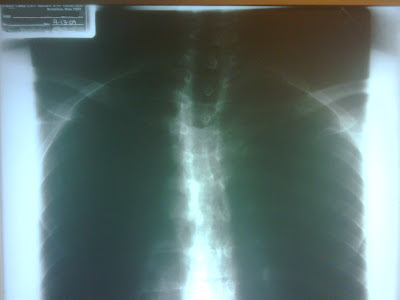 You don't have to go to chiropractor school to know that this isn't the ideal spine shape.

On another note, I finally got the gold cross in Call of Duty 4! 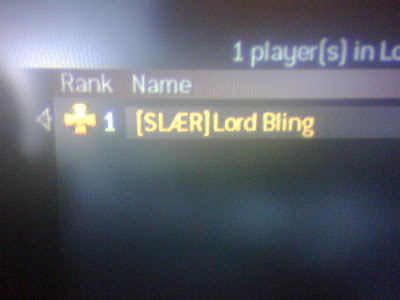 I'm sure the two events aren't related, right?
Posted by Lord Bling at 11:17 AM 3 comments:

Spotted on the entrance at a CVS pharmacy in my neighborhood

Now that the Midge has been through my neck of the woods, he can vouch for the fact that I don't live in a complete ghetto. However, someone didn't tell my CVS Pharmacy that: 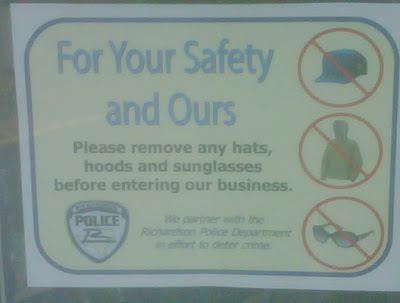 That's not a joke. I took the picture last night. I understand that if the person at the register sees someone walk in wearing a ballcap, hoodie, and sunglasses, they might flash back to some security camera footage they saw on TruTV. But I'm not taking off my fucking baseball cap to pick up some Claritin. How is that for MY safety? Is the cashier going to shoot me because I haven't washed my hair that day, and didn't want them to see how messy it is? And don't get me started on cops wearing sunglasses indoors. They do it all the fucking time, like each one thinks he's Jack Nicholson at a Lakers game. 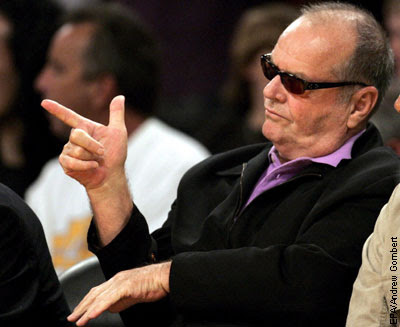 HOLY SHIT, IT'S A ROBBERY! Jack, put the gun down!

That CVS sign is almost as bad as this one: 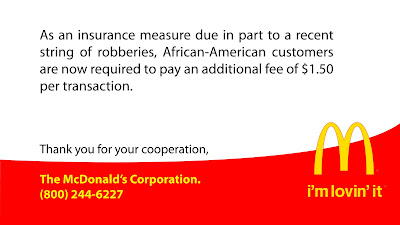 Now, that sign IS a joke, but I don't think it's that far removed.

Seriously though. Would you take off your baseball cap to buy some deodorant?
Posted by Lord Bling at 8:12 AM 5 comments:

I disagree with one part of this. I thought 'The Wicker Man' was HILARIOUS.

The Midge on the Gilley's mechanical bull

Had I known he was gonna ride the bull, I would've brought my digital camera for better quality video:

Once his shoulders got hunched, it was over. Epic dismount though. Ankles skyward, just like that time in county...
Posted by Lord Bling at 9:43 AM 3 comments:

Continuing on the 'non-political' theme, I'm making this Video of the Week about one of the best entertainers of the 1980s: Ric Flair. No television personality made me laugh harder when I was growing up. His arrogant showmanship was obviously an act, but he had a gift. There was no pro wrestler who could talk like he could. Here's one of his better YouTube clips, where he talks the talk, and then walks the walk: